An arc drawn in the air like a perfect pencil line made by an artist. In 1962 Achille Castiglioni designed one of the most iconic (and imitated!) floor lamps in the history of lighting design. Arco, produced by FLOS, is an unmatched masterpiece of elegance and style. A thin telescopic stainless steel stem is counterbalanced by a massive base consisting of a parallelepiped with rounded corners, made of white Carrara marble in the original version.

The composition is completed with a domed reflector in pressed and polished steel, which is height-adjustable.

The arch of the stem, the parallelepiped of the base, the dome of the reflector: 3 components giving real substance to the object in a rather harmonic way. They become art and enter our homes, illuminating spaces with a timeless charm. 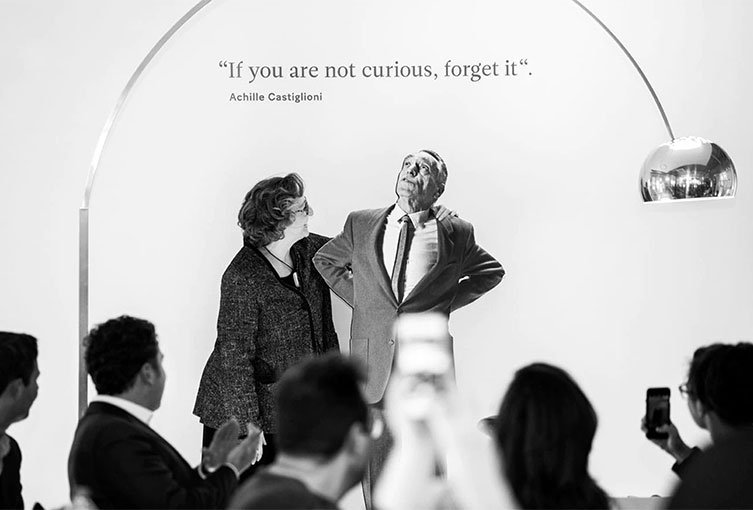 The Arco lamp is a unique blend of simplicity, linearity and functional design, consolidating its image over the course of the years. Indeed, it is one of the most recognizable pieces of design.

But what’s the secret of its overwhelming success? The incredibly simple but incredibly functional design, its versatility and the chromatic harmony of its materials. But the innovative feature that really made the difference when Arco was shown for the first time, was told by Achille Castiglioni itself, in 1980:

"We were thinking of a lamp that would cast light on the table: there were already some, but you had to turn around them. In order to leave space around the table, the base had to be at least two meters away. Thus the idea of ​​the Arco was born: we wanted it made with pieces already on the market, and we found that the curved steel profile was fine. Then there was the problem of the counterweight: a heavy mass was needed to support everything. We thought of concrete first, but then we chose marble because for the same weight it allowed us a smaller footprint and therefore in relation to a greater finish a lower cost. In the Arco nothing is decorative: even the rounded edges of the base have a function, namely that of not hitting us; even the hole is not a fantasy but it is there to allow you to lift the base more easily" 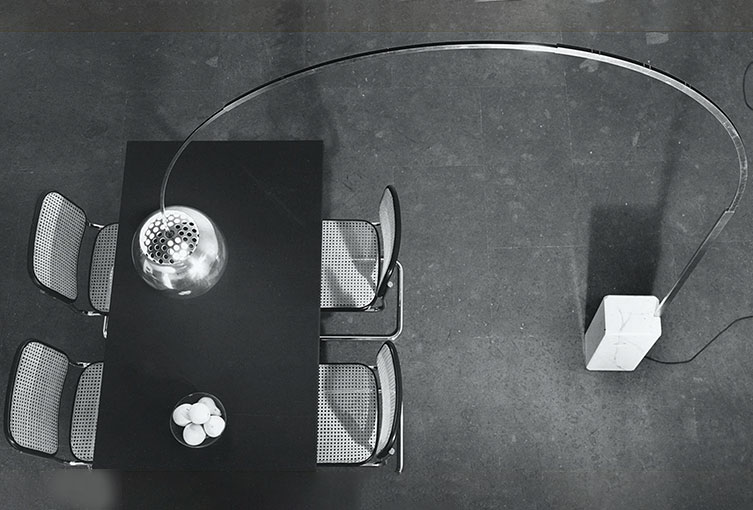 This is how Arco was born, with the idea of ​​having a light effectively "suspended" above a table, desk or reading corner, without necessarily having a fixed suspended lighting system. In short, a lighting element that combines the functionality of a suspended light point, characterized by zenith lighting, with the practical advantages and compositional freedom of a floor lamp, also adjustable thanks to the extendable telescopic stem and the directional dome that houses the light point.

Although its charm is immortal and remains consistent over the decades, the design of the Arco lamp keeps innovating. Since 2009, Flos has designed an electronic dimmer for Arco, the Flos Cubo, which allows you to turn it on and off with a remote control, meeting the new needs of home automation. In 2012, on the occasion of its 50th  anniversary, Arco showed off its new version Multichip Led, always maintaining its original design forged by the Milanese maestro.

Moreover, Arco has been revisited in the colors and in the type of light source, keeping up with the manufacturing standards, for instance the different color of the aluminum cap, which in the very first sets was gold, and the lamp holder, originally white and later adapted to safety regulations. In 2002, on the occasion of its 40th anniversary, a limited 3000-piece version with a black marble base was produced, now a very refined and precious item. Contact us for more information. 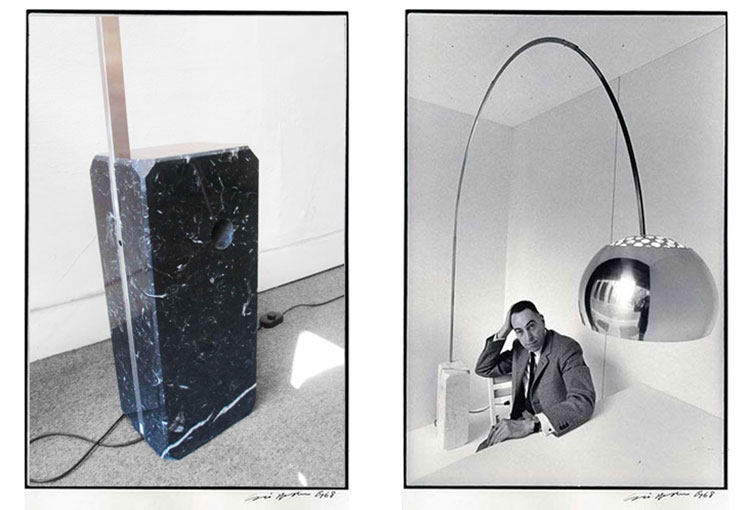 You just have to discover (or re-discover) the Arco lamp and its timeless charm. You can find it on Diffusione Luce e-shop.

"An object that doesn’t add, but multiplies the initial value - economic, aesthetic and symbolic - of the three objects it assembles, creating something new" (Stefano Boeri on the Arco lamp, in "Doing more with less")

Find all the Arco configurations and spare parts available on our online shop: www.diffusioneshop.com