Masterpieces are by definition works of art of excellence and immortal icons, cruising years, sticking to an expression of unrepeatable forms of art. Artemide, founded by Ernesto Gismondi and Sergio Mazza (he who in 1959 launched the first Artemide lamp, Alfa) has left a signature in the panorama of international lighting design. Forty years later, the historic Artemide lamps have become icons and are now called Modern Classics or Masters' Pieces: timeless lamps created for Artemide by the greatest masters of architecture and design over the decades, real masterpieces becoming symbols of lighting design proudly Made in Italy.

Ready to discover all their secrets?

ECLISSE is one of Vico Magistretti's greatest masterpieces, created in 1957 and entered with great success in the production line of Artemide. We can recognize in this small lamp all the interest of the Italian designer for the bold geometric shapes: made of painted metal, Eclisse can be purchased in orange, white or silver gray. Eclisse is made of a fixed spherical structure inside which a semi-sphere rotates, allowing you to direct the light and adjust its intensity. In the completely closed position, it will be like experiencing a short Eclipse… in your bedroom!

As the real first lamp in Artemide catalog, ALFA has made the name of the great Lombard company, experiencing a worldwide success. This historic lamp, coming from the pencil of Sergio Mazza in 1959 became a true icon of the design in the 1960s. It elevates and enhances the traditional lamp model thanks to the use of noble materials and artisan manufacturing processes, thus untying itself from the mass production and rationalist design template back then.

Alfa has a beautiful black marble base, a precious glass lampshade, hand-turned metal details and a warm and diffused light with adjustable intensity are the ingredients of an absolutely unique and perfect lamp as a " forerunner" for the future success of Artemide, so much so that even today Alfa is one of the most famous masterpieces of the company production. 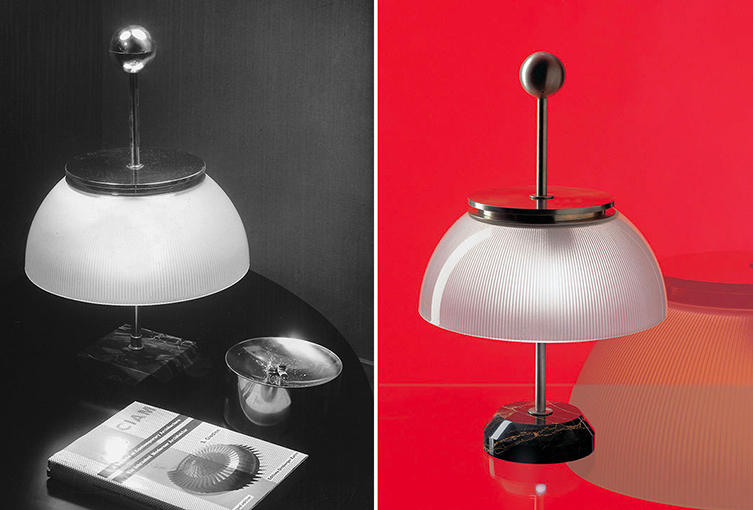 Born in 1967 from an original design by Giancarlo Mattioli, Nessino lamp becomes a real icon of the 70s, hitting the market with great success as the first prize of the Artemide / Domus Studio Competition in Milan testifies. Today it is even showcased in several international museums, including the MoMA of New York. Nessino is a super "pop" lamp, with an ultra-bright glossy resin finish in the white and bright orange variants, which makes its large lampshade (Ø 54 cm) with rounded lines its point of strenght, like a luminous mushroom, characterised by a soft and extremely pleasant light. 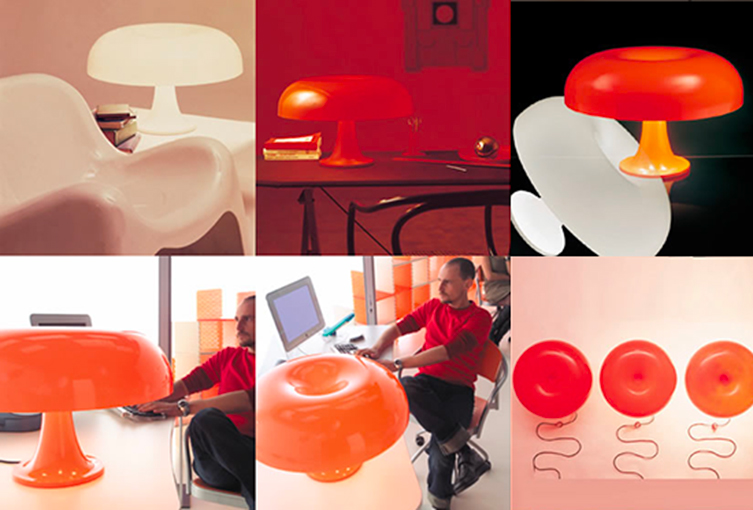 Symbol of the ''made in Italy'' design of the 1970s, Lesbo was conceived in 1967 by the great architect and industrial designer Angelo Mangiarotti, who achieves the combination between sculptural forms and soft rounded lines still maintaining great artisan quality: Lesbo is made up of a polished metal base and a monobloc diffuser made of mouth-blown Murano glass, characterised by white / transparent shades obtained thanks to the excellent know-how of glassmakers, and a diffused dimmable light. All these ingredients make Lesbo a one-of-a-kind design piece. 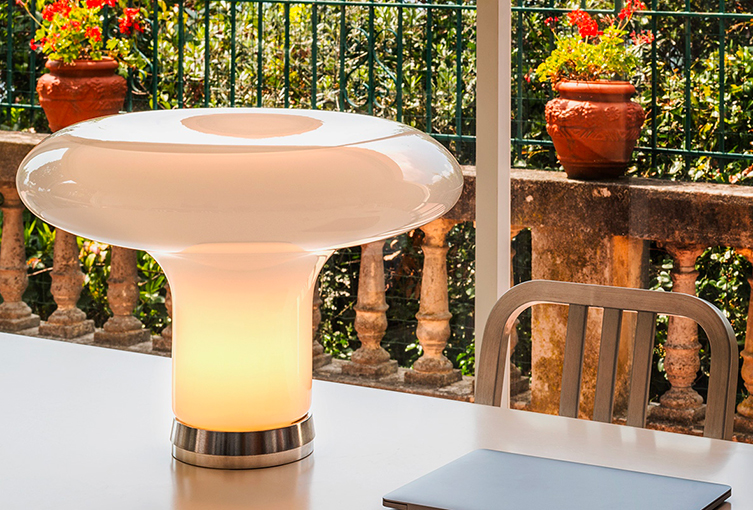 The Shogun lamp summarizes many of the principles that its creator, Swiss architect Mario Botta, even seeks in his own architectural mindset: control of light and the quest for a simplicity of forms, in a balance of richness and sobriety. These are the same ingredients that marked the success of Shogun and that made it an icon of Artemide lighting design, so much so that today we find it exhibited at New York MET building. Shogun consists of a painted metal base on which two adjustable diffusers in perforated steel sheet are articulated. The perforated structure creates suggestive projections of lights and shadows through the texture, which vary according to the adjustable orientation of the two diffusers, enriching the functionality of this lamp. The essentiality of the geometric shapes from which Shogun's design is generated is combined with the aesthetic purity of the colors, only white and black alernating and overlapping, creating a dynamic rhythm. 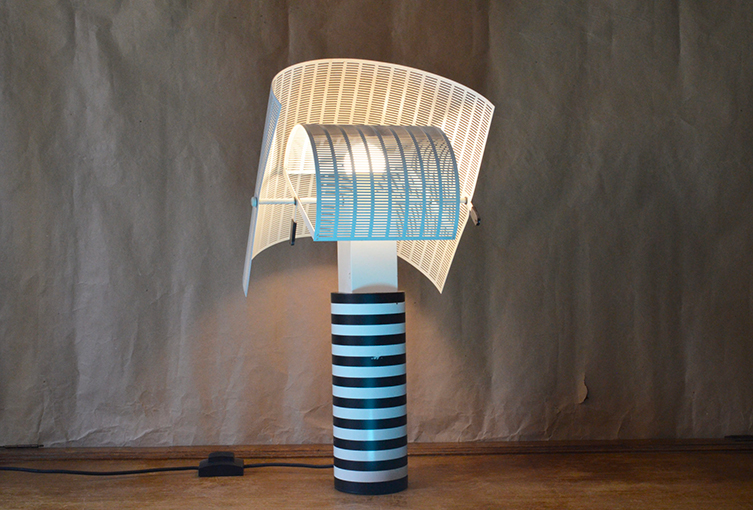 Fato is Gio Ponti signature lamp, himself also being a signature figure of the 20th-century architecture. The 1969 lamp follows the geometric design era featuring an abstract sculpture contained in a square frame, around which the rectangular metal plates are applied as light shading screens, creating a wonderful lightshadow. Fato embodies charm and elegance, simplicity and refinement, which we can only be fascinated by. 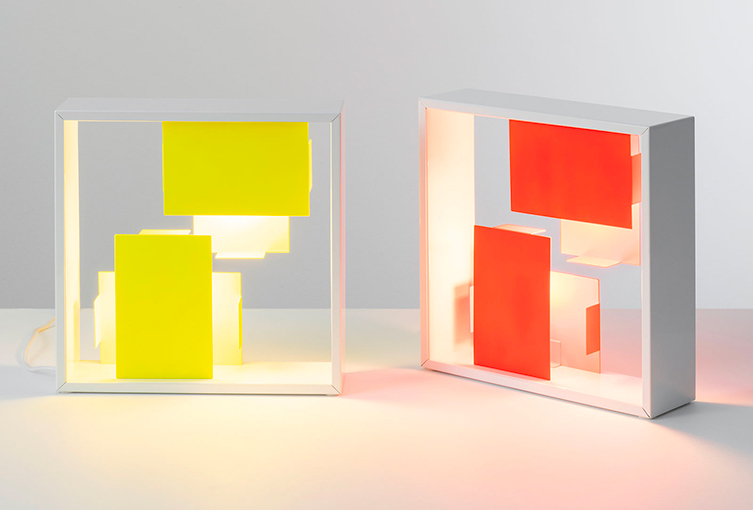 Boalum is sinuosity, brightness and versatility. Designed in 1970 by Livio Castiglion and Gianfranco Frattini and exhibited in many international exhibitions, this flexible and modular lamp seems to emerge from the depths of the abyss ... a sinuous explosion of light that exerts an extraordinary charm and attraction. A multiform lamp and a symbol of great modernity, consisting of a long flexible and modular opal plastic tube: Boalum can be knotted, placed on the ground or on a surface, or even suspended to satisfy any lighting requirement thanks to the 25 internal LED sources arranged along the entire length, emitting an extremely suggestive diffused light. 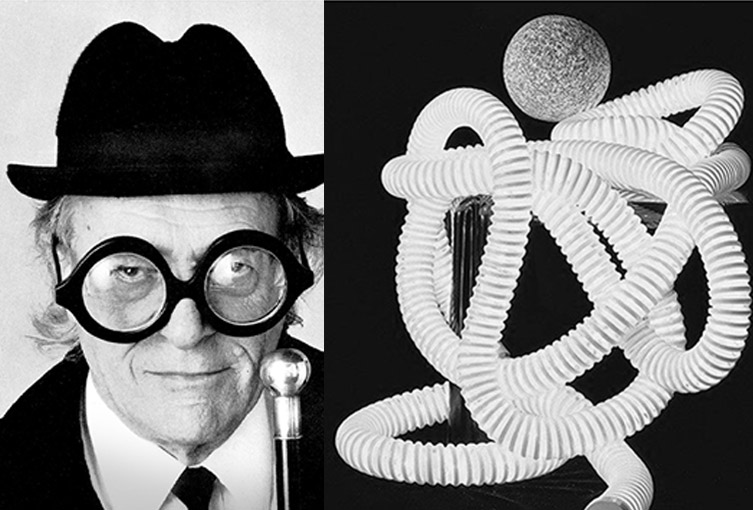 A bold and imaginative design characterizes Montjuic, a sculptural floor lamp with slender geometric lines, designed by the brilliant hand of architect Santiago Calatrava, inspired by the Olympic flame of the 1992 Olympic Games in Barcelona. As in his past architectural works, Calatrava's passion for light, matter, movement, textures, vitality of forms are refelcted in Montjuic as well. The lamp consists of a slender body in polyurethane resin surmounted by a large opal methacrylate diffuser, which seems to be placed precariously on a red marble that acts as a punctual junction between the two triangular elements, one facing the ceiling and the other turned to the floor. In this composition, the light restores the perfect balance and lights up the silhouette of the lamp thanks to a diffused and atmospheric light. 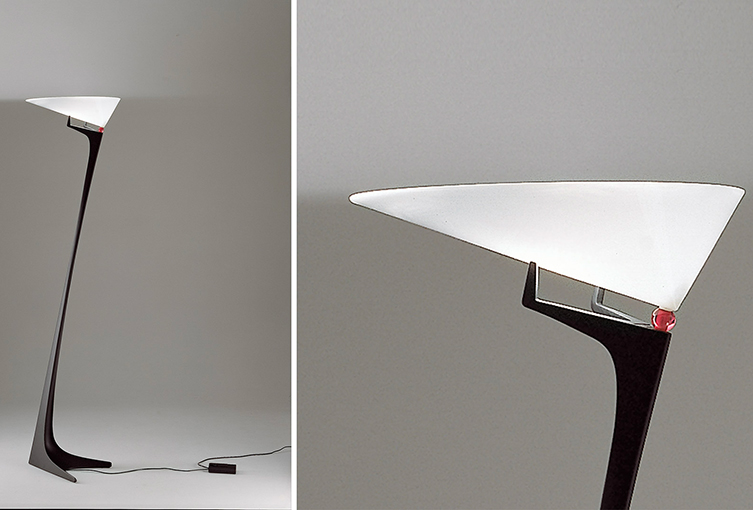 Patroclo was created in 1975 by Gae Aulenti, a pioneer of the 20th century female generation. Her lamp reflects the heartfelt charisma standing out for its “fragile” and “warrior” style at the same time. It soon became an icon back then and in the subsequent years, and today it’s exhibited at the MoMA in New York. This avant-garde lamp consists of a transparent glass body modeled under a metal wire cage that, like a chain mail, embraces its shapes and protects its fragility. Contrasts of delicacy and strength, of immateriality and absolute presence, the glass body of Patroclo is directly blown inside the steel mesh, coming out on the sides of the cage overflowing in abundant organic forms. When Patroclo's light is on, the perforated structure projects a variety of geometric shadows that vary according to the adjustable light intensity, lighting up the heart of this "warrior" lamp. 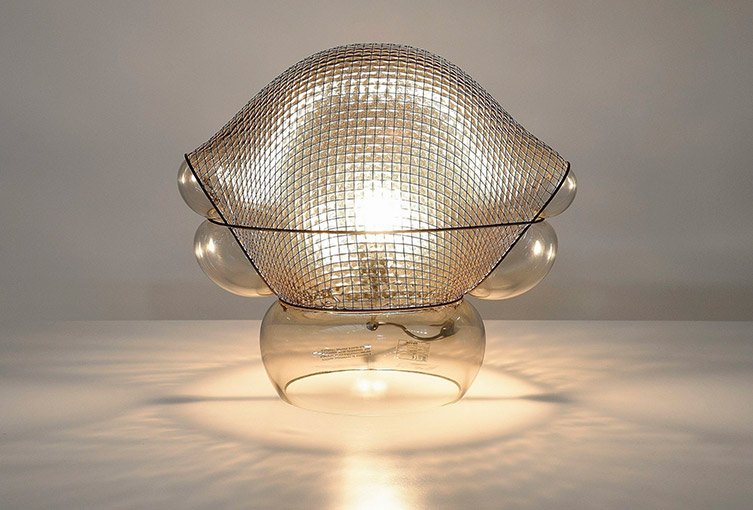 These are the “Masterpieces”, ready to decor your home like actual artworks. As always, you can find them on our e-shop www.diffusioneshop.com.