Yonoh is a multidisciplinary design studio created by Clara del Portillo and Alex Selma in 2006. The studio is characterized by a simple and functional design. Simplicity, innovation and originality, without extravagance, is the fulcrum of their design philosophy, studying every detail in the smallest details of each project. Versatility, timeless style and adaptability are the foundations of their work. During its career, the Yonoh studio has won some of the most important international design awards such as Red Dot, IF design award, Good Design and Wallpaper * Design Award. Clara and Alex, have undergone a training as an industrial designer and have grown professionally separately for several years before meeting at the occasion of an exhibition dedicated to young designers in 2004. At the end of 2006, Yonoh presented his first collection, an ambigram that represents the two heads of the studio. Since 2014, they have been collaborating as associate teachers at Cardenal Herrera CEU university in Valencia and organize workshops all over the world to promote the way of working of the Yonoh studio. 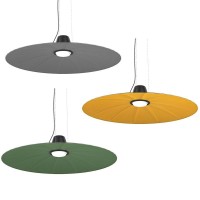 Suspension lamp that develops the theme of acoustic comfort through a reflector made of sound-absorbing material and fabric, capable of absorbing acoustic waves, reducing their reverberation. Central spot with integrated LED light source and methacrylate diffuser with honeycomb screen for dark-light (UGR &lt;19). Available in three colors: gray, mustard...