Born as Gaetana Aulenti, a native of Palazzolo dello Stella (Friuli), Gaetana Aulenti (Gae, as she was known, is pronounced “guy”) studied to be an architect at the Milan School of Architecture of the Polytechnic University, and graduated in 1954 as one of two women in a class of 20. She grew up playing the piano and reading books. She told The Times that she studied architecture in defiance of her parents’ hope that she would become “a nice society girl.” In 1954, she was one of two women in a class of 20 to graduate from the Milan Polytechnic School of Architecture. She soon joined the staff of Casabella, a design magazine, and joined with her peers in rejecting the architecture of masters like Le Corbusier, Mies van der Rohe and Walter Gropius. They called themselves the “Neo Liberty” movement.

Aulenti began her career as a private-practicing architect and freelance designer out of Milan in 1954. Her architectural practice included many interior flat designs for corporate clients including Fiat, Banca Commerciale Italiana, Pirelli, Olivetti, and Knoll International. Her freelance design work included products for Poltronova, Candle, Ideal Standard, Louis Vuitton, and Artemide to name a few. Branching into written publication, Aulenti joined the editorial staff at the design magazine Casabella-Continuità from 1955 until 1965 as an art director, doing graphic design work, and later served on the board of directors for the renamed Lotus International magazine (based in Milan from 1974 onwards). During that time she became part of a group of young professionals influenced by the philosophy of Ernesto Nathan Rogers. Aulenti taught at Venice School of Architecture as an assistant instructor in architectural composition from 1960 to 1962 and at the Milan School of Architecture of the Polytechnic University from 1964 to 1967. With these experiences, she became a visiting lecturer at congresses and professional institutions in Europe and North America from 1967 onwards. She sought membership in two of them, American Society of Interior Designers, 1967 and Member of Movimento Studi per I'Architettura, Milan, 1955-61. During that time she also designed for a department store, La Rinascente and later designed furniture for Zanotta, where she created two of her most well known pieces, the "April" folding chair which was made from stainless steel with a removable cover, and her "Sanmarco" table constructed from plate-glass. Transitioning from teaching, Aulenti joined Luca Ronconi as a collaborator in figurative research for Laboratorio di Progettazione Teatrale out of Prato, Florence (1976–79). She then also served as vice-president of the Italian Association Of Industrial Design (ADI). In 1981 she was chosen to turn the 1900 Beaux Arts Gare d'Orsay train station, a spectacular landmark originally designed by Victor Laloux, into the Musée d’Orsay, a museum of mainly French art from 1848 to 1915. Her work on the Musée d’Orsay led to commissions to create a space for the National Museum of Modern Art at the Centre Georges Pompidou in Paris; the restoration of the Palazzo Grassi as an art museum in Venice; the conversion of an old Italian embassy in Berlin into an Academy of Science; and the restoration of a 1929 exhibition hall in Barcelona as Museu Nacional d'Art de Catalunya. In San Francisco, she transformed the city’s Beaux Art Main Library into a museum of Asian art. In 2011, Aulenti oversaw the expansion of Perugia Airport. Aulenti also occasionally worked as a stage designer for Luca Ronconi, including for Samstag aus Licht (1984). She also planned six stores for the fashion designer Adrienne Vittadini, including one on Rodeo Drive in Los Angeles. (She even designed the mannequins.) Her career ended with over 200 built works. 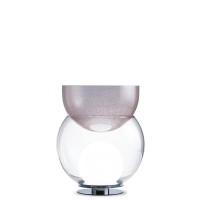 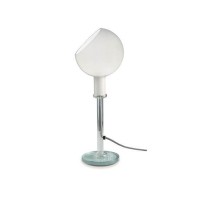 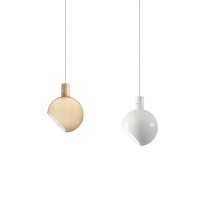 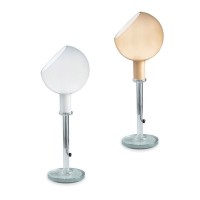 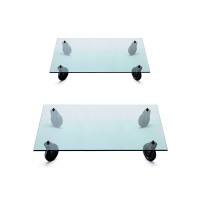 Table with Wheels rectangular model - Historic decorative table from 1980, made of transparent glass with four wheels. Available in two sizes. 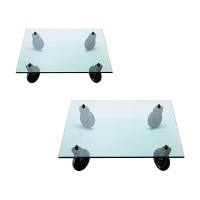 Table with Wheels square model - Historic decorative table from 1980, made of transparent glass with four wheels. Available in four sizes. 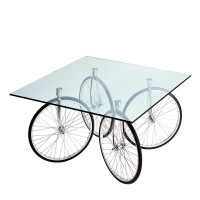 TOUR - Decorative table with wheels, historic from 1993, made of transparent glass with four pivoting wheels and solid rubber tires. 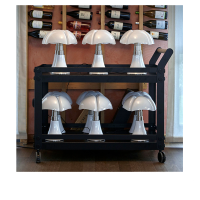 Service trolley for the transport and recharging of 12 cordless mini bat lamps. Complete with drivers and cables with jack connection for recharging the battery. Single power cable for connection to the network. Dimensions: 60 x 100 H 90 cm. Emilian martinelli design in 2018. 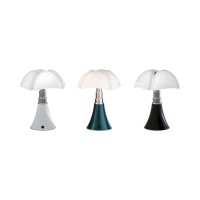 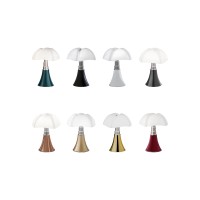 MINIPIPISTRELLO - Table lamp in the smallest size of the family, NOT adjustable in height. Stainless steel telescope, methacrylate diffuser, painted metal base and knob available in 8 finishes. Complete with dimmable LED source. Design by Gae Aulenti 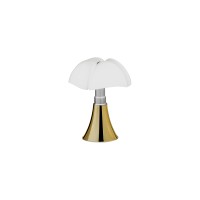 MINIPIPISTRELLO Oro - Table lamp in the smallest size of the family, NOT adjustable in height. Stainless steel telescope, methacrylate diffuser, base and knob in gold painted metal. Complete with non-dimmable LED source. 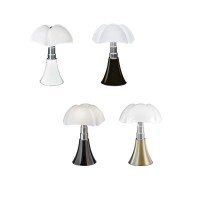 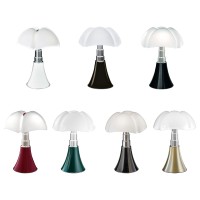 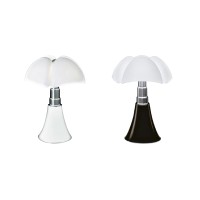 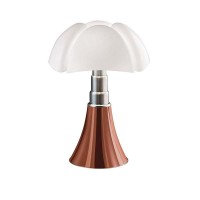 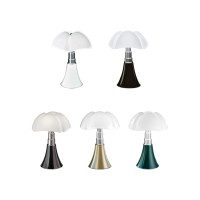 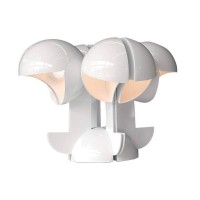 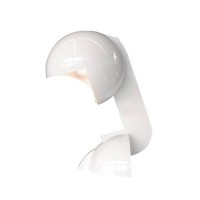 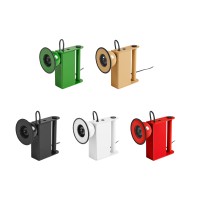 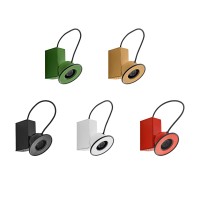